If you don’t know what is going on in Cuba, I urge you to look into the country’s history. The current developments in Cuban agriculture are amazing! We have a lot to learn from Cubans.

I started researching agriculture because I came to realize that a lot of current global problems are effects from challenges in the agricultural sector—not only food insecurity, but greenhouse gas emissions, diseases, rural degrowth, etc. etc. Food is such an interesting topic because it has historical, social, political, and economical implications. What we eat really depends on how we handle land and what we cultivate on it. And agriculture is so closely tied to class struggle—as demonstrated in my previous post briefly outlining the peasant uprising that drove the Cuban Revolution. 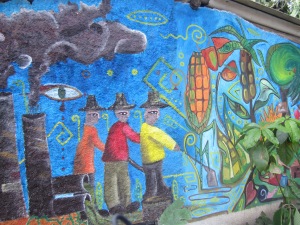 As I flew into Cuba, I stood in awe of such a beautiful island, but I also felt sad, strangely. I was becoming upset that everyone on my plane were clearly there for a resort vacation. In a sense, tourism is just another form of exploitation, especially in the way that it commodifies nature. I didn’t come to Cuba to stay in a resort bubble. I want to interact with Cuban people and get at least a glimpse of what it’s like to live in the country. My ultimate goal is to gather real perspectives on their agriculture. I may not get all my answers in such a short time; in fact, I feel a bit stupid and naïve about it, but I don’t want to be passive.

When I left Cayo Coco airport, I found a government-owned taxi that drove me to Santa Clara. I was surprised that I could converse with the driver quite a bit. What I have seen of the farms just passing through is incredible—cattle roaming in large fields, chickens (on the street), greenhouses, mixed farms—but also, from what I saw, sugar plantations are still very much alive.

The town that has really struck me so far was the city of Morón. Someone told me that Cuba reminded them of post-war Europe—in that the buildings looked a bit war-torn. I think that was true in this town–the infrastructure is quite old. But what struck me that there were hundreds of bicicletas in this town. People were biking everywhere! They ruled the road. Everyone, old and young, big and small; they all biked. It was quite nice and peaceful.

I met my group in a small hotel named Los Caneyes just outside of Santa Clara. I find nice moments in just meeting other people—I spoke to s

everal people who work at the hotel (mostly embarrassing myself with my broken Spanish), a band who played “Guantanamera” for me, and a few people in my group for the tour, including a farmer from Saskatchewan who is going to show me a neat little device he uses to test soil quality. I was also delightfully surprised to meet Fernando Funes, the Coordinador Programa Agroecología from ACTAF (Asociación Cubana de Técnicos Agrícolas y Forestales), who I thought I missed due to my late flights. Fernando is sooo friendly and energetic—he greeted me bowing and kissing my hand—something I totally did not expect from reading his papers. He called himself a “crazy scientist”—I’ve already taken his word for it. I hope I can give back to those as much as they having in welcoming me.

These entries are based on my experiences observing urban agriculture across central andeastern provinces in Cuba in February 2013. It’s my hope that sharing these experiences will inspire others to use spaces in creative ways to grow and share food. I also hope these stories do justice to those who so generously shared their work and personal stories with me. Check out: www.theurbanfarmer.ca  for opportunities to study and observe agriculture in Cuba.